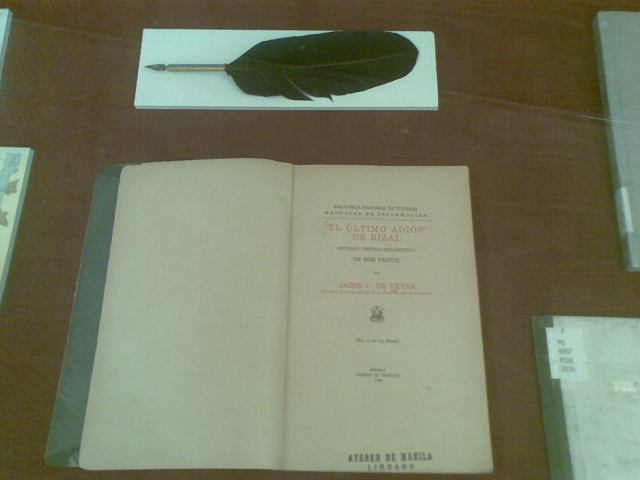 I can never forget the day my name was misunderstood by a barista in a famous coffee shop chain. As he asked for my name, I responded with my first name, “Joaquin”. He struggled and then asked, “What again sir?”

“Joaquin,” I responded with a louder voice thinking I said my name initially too softly.

Then he replied, “I heard Sir but how do you spell it?”

I was aghast. But I was even horrified by what was going to happen next.

Just as I said the first letter, which was “J”, he simultaneously said “W”. I corrected him and then, just before I was going to say “O”, he said “A”. I was already thinking of how he would be spelling Joaquin as “Wakin” or whatever.

We Filipinos are facing a great and terrible identity crisis, a degradation of heritage and an awful decline in cultural pride. For me though, these ills are quickly being facilitated by our rejection and/or ignorance of our Hispanic heritage. As we have thrown mandatory Spanish language and culture subjects out of the window in countless colleges and universities in the archipelago, we have also pro-actively facilitated the death of our Hispanic heritage.

How could any Filipino not know how to spell Joaquin? Is it now so foreign a name that it is difficult to spell? I think that what happened is a true and telling indicator that the Philippines has forgotten or at the very least, has ignored, its Hispanic heritage and has exchanged this with an Americanized-culture.

This year though, we must take a good look at our history and remember this year’s significance.2011 is the 400th anniversary of the oldest Western-type of educational institution in the Philippines, the Dominican Fathers’ University of Santo Tomás, a product of the Spanish regime’s labors on this side of the earth. From her hallowed halls walked the country’s first seminarians, writers, poets, doctors, lawyers, nationalists and statesmen.

Remarkably, one of UST’s students celebrates his 150th birthday day this 19 June 2011: Dr. José P. Rizal. Providentially, today, the Spanish-speaking world celebrates El Día del Español or the Day of the Spanish Language. Manila, through Instituto Cervantes, celebrates this important fiesta yearly. This year though is extra special since it falls on the day before Rizal’s 150th birth day.

The birth date of José Rizal is a national holiday that invites and compels Filipinos to think and ponder on the life of that extraordinary Filipino, the man León Ma. Guerrero proudly proclaims as the “First Filipino”.

Rizal, his very life and his collection of works, are amazing testaments to the hero that he was. The many pieces he wrote, whether these were for literary or propaganda ends, were beautiful creations meant to inspire and cajole people to think of their fellow men and women, and most of all, to realize the great capabilities of being human and being Filipino.

His journey through Europe as a medical practitioner, writer, scholar and reformist amazes us and captivates our imagination. We imagine a young Rizal on rough seas, on steam trains and carriages journeying through Europe in pursuit of fellow-minded reformers and scholars. A short, brown-colored young man in the midst of the leading minds in the Europe of the late 1800s is indeed amazing and We also read about Rizal the lover: an ardent devotee of the arts and artists, a sucker for women and a passionate Filipino always ready to expand his network among intellectuals.

But Rizal and his greatness, for that matter, point to an aspect of his life, which we ought to remember and take note of and that was his Hispanic heritage. Rizal, whether we like it or not, was a proud product of a Hispanic Philippines, a Philippines that didn’t look towards the United States or Japan or Singapore but towards Mother Spain, la Madre Tierra.

And for all of us who know (even quite a little) about Rizal, if there was one language he utilized and exploited, it was nothing else but the Spanish language. The same language of Cervantes, Ignacio de Loyola, Calderon de la Barca and that of all the Philippines’ ilustrados was the same language Rizal used for his speeches and more importantly, his writings. These writings, some great, some ordinary, all present to us the worldview and also, the interior spirit that drove Rizal to live his life lovingly dedicated to the Filipino people.

His poems, plays, letters, studies and not to mention, his novels were written in the Spanish language. Likewise, his very lifestyle in the Philippines, which he enjoyed, was very Hispanic. A love for the life in the country, a strong devotion to the Catholic God and an academic life in the Spanish-owned Ateneo Municipal and Universidad de Santo Tomás are just some of the examples of how Rizal lived the Hispanic identity of the archipelago.

But if there is one thing more fundamental and more telling of Rizal’s love affair with Spain, it was this: his desire that all Filipinos, a term that was not yet widely used before his own time, be treated as equal brothers and sisters of the peninsular Spaniards. Although he had his revolutionary phase, Rizal died honoring and hoping for Spain – a Spain that he desired so badly, it cost him his life. Imagine, he even volunteered to be a medical doctor for the Spanish forces fighting the Cuban revolutionaries!

Rizal and his very memory, I dare say, can only be fully appreciated if we also nurture and live in the same Hispanic environment the great hero once lived in. How, first and foremost, do we appreciate his body of works, his sayings and his worldview if we do not speak, hear, write or preserve the same language he used? How could we see his point if we are not on the same footing? The Spanish language and culture in the Philippines must therefore be preserved, utilized and revitalized for the memory of the people to be enriched and maintained.

The works of Rizal and the rest of our propagandists, from the 1800s to the 1930s, is hidden in a cave, which can only be accessed if we hold the torch of the Spanish language. With the same torch, we can be able to connect our past to our present, and also, with our future. The time is a ripe for us to maximize our culture and history, and in doing so, utilize our past as a Spanish-speaking country to connect with our progressive brothers and sisters from that continent across the Pacific, Latin America. It is about time that we look to our Hispanic brothers and sisters so that we might learn new and also, tested social development methods. In the same breath, we should strengthen our cultural ties with a continent, which used to play a very important part in the formation of our archipelago by virtue of the Manila-Acapulco galleon trade.

Realizing the Hispanic that was Rizal, we begin to open our eyes to new possibilities and inflame our hearts with a reverence for our sacred and glorious past. Let us keep the memory of Rizal, and the Spanish language he loved and used, alive and useful.

It is therefore auspicious and providential that this year’s worldwide celebration of El Día del Español, of the Day of the Spanish Language, falls on the eve of the 150th birth anniversary of one of the Spanish language’s shining gems and radiant joys, Dr. José Rizal. Undoubtedly, if one is truly keen on understanding, appreciating and following Rizal, learning the Spanish language not simply as a foreign language but as a truly Philippine language is imperative and noble.

It was therefore a meaningful and poignant gesture on the part of Spain’s cultural center in the Philippines, Instituto Cervantes de Manila, under the baton of Sr. Don. José Rodríguez, to have a 150-member chorus recite Rizal’s Mi Ultimo Adíos earlier today.

It has often been said by my friends and acquaintances who speak Spanish that when one knows Spanish, and one reads Rizal’s Mi Ultimo Adios, it would pose no surprise if one suddenly sheds a tear. You don’t have to be a Filipino to realize the moving power of Rizal’s poems.

Our cry for true freedom starts with our shout for love of country, and surely, two ways of showing one’s love for the Philippines is to study the Spanish language and to appreciate one’s Hispanic heritage and tradition, Rizal being the one powerful model and manifestation of that Hispanism.

Things made yesterday still influence us until today. Things made today will influence us tomorrow. Things of the essence such as faith, culture, food, music and values should never disappear nor eroded by the times. Instead, these must be recorded, lived and shared. Something made yesterday - hecho ayer - can be tomorrow's saving grace. Never ignore the past.
View all posts by hechoayer →
This entry was posted in CULTURA, Rizal and tagged Dia del Espanol, Hispanic Philippines, Hispanism in the Philippines, Instituo Cervantes de Manila Dia del E, Rizal and the Spanish language, Rizal@150. Bookmark the permalink.

13 Responses to José Rizal: Gem of the Spanish Language, Model of Hispanic Philippines